I was working on a new video detailing the last few months of 2021, but we all know how my video & audio work is going.

In the meantime, I’ve been transcribing my video scripts to blog posts. I don’t feel pressured to finish videos because I’ve no plans to become a full time YouTuber. It’s been six months since my last video and no one is kicking in my door looking for a new one. This is just fun for me.

So what’s been happening? Let me tell you …

This summer and fall I managed to snag a few new to me items:

I’m going to start with the guitar:

I’d been looking at getting a hollow body electric for some time when I found a listing for this Ibanez Artcore on the website of a local second hand music shop. One afternoon I stopped by and tried it out (along with a lower end Gretsch), and fell in love with the Ibanez.

It worked out that that I didn’t have to save for it. How? Simple. When I bought the Ibanez, I traded in my old ESP guitar which brought the price down, and then sold one of my two bass cabs to make up the difference.

I did this because I was never really fond of those items.

What do I mean by that?

The ESP and the bass cab were items I purchased simply because I was SO excited by the very idea owning something new that I just bought the first thing that felt “ok”. It wasn’t love like the Ibanez, it was just “yeah, this is ok.” I was never really 100% on it 1.

That ESP I traded was an LTD EC-200 model. Quilted maple, red stain. Les Paul shape. Played kind of ok. It never stayed in tune and the only thing it was good for was metal. For any other style it was just “ok”.

I bought it brand new a little over 10 years ago using gift certificates and some extra cash I’d saved up. And once the excitement of NEW wore off, it just never felt … good. Just merely ok. I was in a metal band, it did the job so I lived with it.

The bass cab I traded felt the same. It was an Ampeg PF series and I bought it, along with the matching head, because I thought Ampeg was the holy grail. I ignored the fact that when I tried it in the store, using my own bass, that I thought it sounded a little muddy. Who cares?!?! ITS AN AMPEG!!!

I just put my head down and tried to make the best of it – but it never felt right. In the the end, it turns out that the Ampeg head sounds pretty great with my cheap TC Electronics cab. So that’s what I started using and the Ampeg cab was relegated to being a laptop stand when I was recording drums.

The moral of the story is: “don’t settle if you don’t have to”. It’s want versus need. Let’s say you NEED a computer for work because yours just died, then you can make due with whatever you can get your hands on.

But if it’s something you WANT and you have the means and the time, don’t get caught up in the excitement. Settle yourself down, take a breath and make sure whatever you get is exactly what you’re looking for.

This brings me to my second purchase: Drums.

You may have seen my “Can you make cheap drums sound better?” video. If you have, you know the kit I was working with.

I told myself that if I was still playing and recording drums at least a year after getting that super intro level Intex kit, then I’d look into upgrading.

Based on the never settle idea, I’ve become more … picky. I tell myself that I’m not going to commit to a purchase, especially a BIG purchase, unless I’m 100% on it.

In the case of a drum set, there were a lot of good deals in the online classifieds. But while there was temptation to just grab the first, non budget kit that popped up, I didn’t want to wind up with something that I wasn’t 100% on.

And over the summer, I finally found that kit waiting for me on Kijiji. 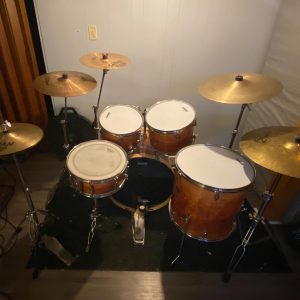 The kit is a Pearl Export. It’s previous owner is a drummer who was moving to another city to study music at a university and couldn’t bring his kit. He loved this kit; he’d stripped, stained, and re-varnished them, so they’re very unique.

“I really hate to let them go,” he said, “but just I won’t have the space for them.”

He played them and they sounded great (of course they did, he’s a killer player and 3/4 of the drum sound is the player). I played them and while I couldn’t make them sound as good as he did, they felt exactly right. In fact, they felt so right I didn’t even haggle. I paid what he was asking.

I told him they’d be going to a good home, and here they are. He even threw in some extra cymbals, a cymbal carrier and a couple of stands. All in all it was a fantastic deal and, to this day, the kit feels perfect for me.

Last, but certainly not least, a couple of months ago I came across a local audio engineer who was selling two SM-57’s for the price of one. I didn’t even think to barter for these. I just pinged him and said “I’ll take them.”

In closing, while it’s always good to save money, really be sure about what you’re about to buy. Not being 100% on something really does have an effect on you down the road. For example, with the ESP, I felt it every time I played live and had to tune it between every single song. That constant feeling that you’ve been ripped off – or that you’ve ripped yourself off – because you jumped the gun is horrible.

Take your time. Be sure. Don’t settle.

1: Besides the examples above, this has happened to me a few times in my life, and I’m sure it happens to everyone from time to time. One more example is that I own a mountain bike that I’ve never really enjoyed riding and I question why I ever bought it. I just got caught up in a moment at a sports store one day and… yeah. I used to ride it to and from work every single day and with every pedal I tried to convince myself that it was a great bike, but it wasn’t and I hated it. The only things I like are the handlebars and the pedals, both of which were third party add-ons I bought in an effort to like the bike. I haven’t ridden it for more than ten minutes at a time in over five years, and I love cycling. Lesson learned.