In this episode, I talk about the mindset you need to deal with a constant barrage of “you need the fancy, expensive, professional stuff!”

Whether it’s digital vs analog, or budget vs high end, it can be difficult to do your own thing while ignoring marketing and, especially, those on the Internet who honestly believe nothing worthwhile comes out of anything entry level.

Made a quick video for Millbrae Exit. All clips are royalty free from Pexles. Links to the various clips are in the YouTube description.

Low Budget Lifer – Episode Two is in the works, however I inadvertently deleted the folder (and it’s backup) containing my video templates so I have to start from scratch.  Go me.

Episode One: “So What Is This Exactly?”

The Low Budget Lifer is a thing that I’ve started. Since I spend so much time harping about the benefits of second hand, refurbished, or low-mid range music equipment, I’ve decided to document how I work within my means.

“This video is the start. It’s so fresh, I wasn’t even thinking about uploading it YouTube when I put it all together. In this first upload, I stumble my way through explaining what this is all about.”

Here is the newest tune.

This track started out as  a silly little guitar thing I came up with last April while I was drinking beer. It then morphed into the GLS Test I posted back in September. Over the course of the past few months, it was reworked it and recorded from scratch using the following:

For mixing I only used the EQ and compression on the Mixbus channel strips and the only plugins used were the included ACE reverb and delay. I wanted to keep it as simple as possible and see what I could get without relying on a ton of plugins.

All in all, I’m pretty pleased with the end result. Hopefully the next one won’t take as long.

In no particular order …

Transitioning back to Windows has been pretty painless. This here refurbished ThinkPad is happily humming along and I’m able to do nearly everything I want to do.

I still can’t find anything that even comes close to MainStage so I’m keeping my little MacBook Air around just for that purpose. When the Air up and dies, I’ll revisit this.

I’m enjoying catching up on all the tech I’ve ignored for the past decade. This has led me to rediscovering my old hobby of building phantom computers on Newegg.

I’ve moved back to a mouse when the ThinkPad is in desktop mode. I found that while Magic Utilities give me all of the macOS gestures in Windows, the overall feel is jittery and nowhere near as precise or velvety smooth as it is on a Mac.

This Razer Deathadder though … it reminds me of just how shitty Apple mice are.

Speaking of “laptop in desktop mode” you know what’s really nice? Having a removable battery. When I plug the ThinkPad in, I can pop out the battery and leave the laptop plugged in forever and not worry about the battery swelling and bursting. Ever.

On the music side of things, I’ve been using Harrison Mixbus more and more.  I purchased it last year when it was on sale and played around with it a few times on the Mac, but never really gave it an honest go. I always found myself back in the familiar world of Reaper. I have to say, it’s quite the fantastic DAW. I really, really, really like the channel strip EQ and Compression. The ability to tweak on the fly without having to dig for plugins is incredible.

. I wound up getting it.

Speaking of Mixbus, that song I’ve been working on since April (yeah, I know) is nearing completion. I’ve laid down the bass and most all of the guitars. Next up is to rewrite and record the drums. It’s coming together nicely.

Those GLS ES-57’s are a goddamn steal. Don’t let anyone tell you otherwise. Go buy a couple of them.

When setting up my office/recording area, I needed a shelf of some sort to hold my outboard units and the Mac Mini and the stereo and store my bits and bobs. Always with the and. I wound up with one of those Ikea HEJNE (the older version that was 50cm deep), plain pine storage shelves. Sure it held everything but it was chaotic. And ugly. I mean, they look fine in storage rooms and garages, but in a home office?

Another problem with big shelves: Not only do they take up excess room, they give you an excuse to keep everything.

I mean, just look at this monstrosity: 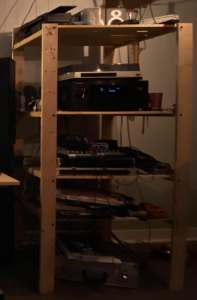 Last week I walked into the room, took one look at that giant eyesore and decided that it had to go.

END_OF_DOCUMENT_TOKEN_TO_BE_REPLACED

I’m typing this post on a second, maybe third hand ThinkPad, testing out IA Writer 1 on Windows to see if the experience mirrors that of macOS and so far so good. Reaper and Mixbus are doing their things as the licenses work for both platforms. Hell, pretty much all of the apps I use these days have Windows versions and they all run pretty damn good.

The dark horse is MainStage which I use quite a bit and is an absolute steal if you’re on the Mac platform. It’s thirty bucks and comes with untold gigs of samples and is, quite simply, one of the most powerful, easiest to use  music performance apps out there. Moving to Windows is going to be super hard without MainStage.

END_OF_DOCUMENT_TOKEN_TO_BE_REPLACED

Here is a snippet of a composition I’ve been working on since April. This is one of the most recent variants of the song and includes testing the GLS ES-57‘s I bought last month.

That recording is dry. There is no eq or compression on any of the tracks, just panning and volume.

I used my LTD EC-200QM (with 12 month old strings – I really need to change those) and a Schecter Revenger I borrowed from H, Opium Winter’s guitar player. Both guitars were played through a Kustom The Defender tube cobo amp 1 (also thanks to H) miced with an ES-57.

The drums were recorded about two weeks before the ES-57’s arrived. I did get four of them and plan to test them on snare and toms as soon as I can (I also need some more mic stands and/or drum mic clips). If the sound as good on drums as they did on the guitars, then they’ll be used when I lay down the final takes of this piece.

1: The Kustom is out of this world. H can get it to howl and scream with distortion and effects but up until now, I’ve never heard it clean in a quiet environment. This thing has colour and a well rounded tone. I’ve played a lot of budget amps in my life and this has to be my favorite.

So I did this thing. It’s pretty off the cuff and rather ridiculous. It was born out of practicing recording techniques and trying to remember anything I learned while taking drum lessons. I setup a Soundcloud account because I think I’m going to do more ridiculousness. I’m Canadian, somewhere in my forties, married to my soulmate, have three kids, live in the ‘burbs, and work from home.

I mainly play guitar and bass, I mess around with keyboards, and I’ve taken some drum lessons. I love to compose, perform, and record music. In the recent past I’ve played guitar in The Unavowed, bass and vocals in White Lake Mountain, and am now playing bass and synths for Opium Winter. Sometimes I upload things to various music sites. I also mess around with visual art, video editing, and writing.

I dream a lot.

I do all the above when time permits, and time doesn’t give me a lot of permission these days.

Although it may seem otherwise, I have very little complaints about life in general. This makes it difficult to write lyrics; hence most of my music is instrumental.

You can find my stuff at: