Almost half a year into the Great Linux Experiment and I’m still here. The last time I tired running Linux as a desktop OS was back around 2001. It went so horribly sideways that I lasted maybe two days. Then again this was 2001 and while I could get Linux (Mandrake) installed, couldn’t get the damned thing online. So it was essentially a weekend of yelling and screaming to myself because I had no Internet to yell and scream into.

Now I can scream all I want, anytime I want. Here are a few things I’ve discovered:

END_OF_DOCUMENT_TOKEN_TO_BE_REPLACED 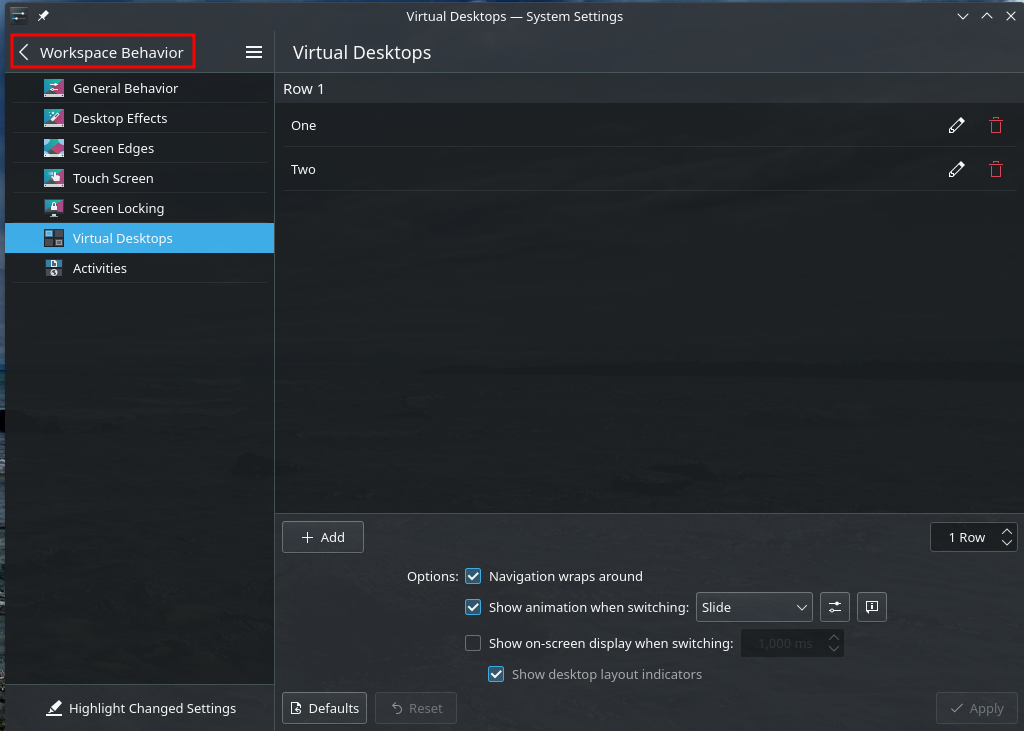 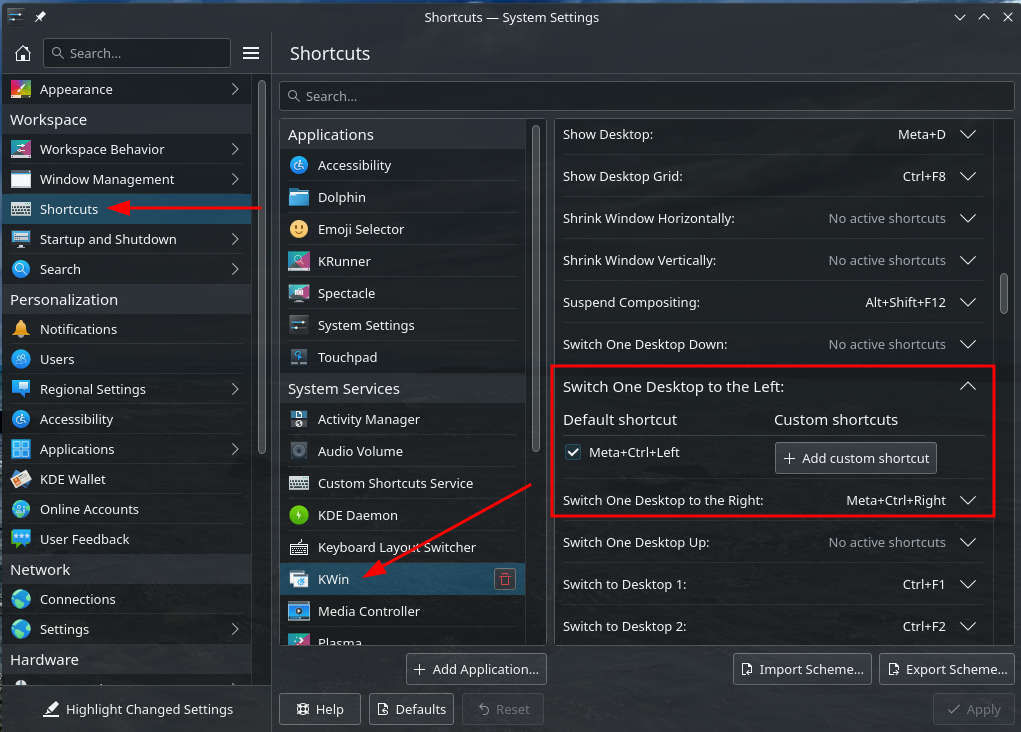 There has been some ballyhoo of late over the EU’s regulatory decision to force phone hardware companies to use strictly USB-C connectors for charging.

The quick and dirty is that the EU wants to force hardware manufacturers to make charging ports on all phones, tablets, cameras, headphones, portable speakers, and handheld video game consoles USB-C.

Uh-oh. Sounds like they’re trying to stamp out innovation, kill competition, and shut down Christmas all at the same time.

END_OF_DOCUMENT_TOKEN_TO_BE_REPLACED

Just gonna put this here because I’m a n00b.

In short, for folders:

I’m going to add a little more to my post from last week. Yes, yes I’ve whinged and kvetched about computers here many times but I’ve been rethinking my relationship with technology quite a lot over the past few weeks.

Up until the past year or so, I’ve been what you would call a die hard Mac user and had been since around 2007. Apple was my jam. The house is filled with MacBooks, iPhones, iPads, Apple TV’s, Apple Watches, and HomePod mini’s.1

I still have two Macs but one is at deaths door and the other is so slow it’s been relegated to being a lowly media server.  In the meantime, I’d been researching new machines and using my work computer, a Dell XPS running Windows 11, as a stopgap – and we all know that using your work computer for personal shit is never a good idea.

While I’m somewhat interested in MacBooks, I’m no longer the fanatic I once was. Apple made some design and pricing decisions over the past few years that soured my taste. Touchbars, USB-C, shitty keyboards, $500 wheels, $1200 monitor stands … you get the picture. Some of their recent designs are good (well the MacBook Pros anyway), and the Apple Silicon chips are interesting. Yet while I was considering saving and getting a MBP, in the end I simply could no longer justify the prices Apple is asking for their computers. So instead of spending a small fortune on a new MacBook Pro started looking at the PC market.

The work Dell I’ve been using would be a really nice computer if it wasn’t so prone to hardware issues. At the beginning of of the year I had to run the gauntlet with Dell Support. Three motherboard replacements later and currently the trackpad doesn’t work if the laptop is plugged into power – and this is a $2500+ laptop.

I also am partial to Lenovo ThinkPads but one of those would also run me a couple of thousand dollars.

And then I got to thinking: do I really need to part with that much money just to get a computer, any computer, that can handle basic music production and light video editing?

So I started looking at the second hand and refurbished market.

Here is what I found:

So count me in. Here I am on my refurbished HP laptop and everything is going just fine.

This is primarily for Mixbus and Mixbus32c running on Linux. the distro I’m using is Fedora Jam, however this may apply to other distros as well as Ardour, which Mixbus is based on.

Open a Terminal window and check the memory limit by typing ulimit -l . You may see something like this:

This means that Mixbus is limited to 8GB of memory. To open this limit up, in Terminal, edit limits.conf:

Add the following line (or if it already exists with a # in front of it remove the # and change the number value to unlimited):

Save the file and check the ulimit again. You should see this:

Launch Mixbus. If you see the same warning message, check your group in Terminal:

If you don’t see the audio group listed, for example:

add your user to the audio group:

Launch Mixbus and the message should be gone.

After all my posts opining about Apple, macOS, Dell, and Windows, I’ve thrown my hands in the air and given up looking at new computer hardware. I have a ton of reasons which I’ll write about, but the main one is that I’ve become dismayed thinking about the amount of second hand computers that exist while companies churn out new product for ridiculous prices. As a friend of mine recently said: “I like the idea that Apple is making high performance chips that are low on power consumption but I can’t, and won’t spend that much money on a computer.”

After looking into the second hand market, I headed to a local, mom and pop refurbished computer store and marveled at the WALL OF LAPTOPS they had on display: 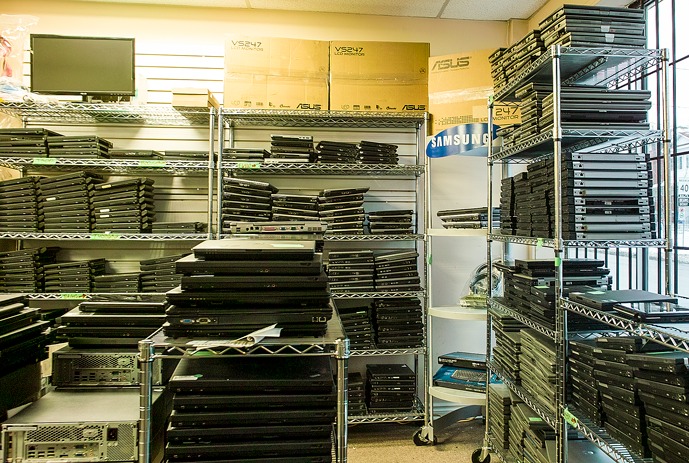 These are all second hand/refurbished. And they have more than these stored away in the back. They have old old computers, not so old computers, and newish computers. Give them an idea of what you’re looking for and they’ll hook you up. Why would anyone buy something brand new? Performance? The ability to run whatever is shiny and new?

I ended up purchasing a refurbished HP EliteBook  850 G3. The model is around six years old and came with an i7 6600u, 16GB of memory (which I upgraded to 32GB thank to an extra stick of ram I had lying around) and a 512 SSD. Supposedly the CPU is not Windows 11 supported but who cares?

In another twist, I decided to flatten the hard drive and give Linux a run for its money.

After doing some research, I settled on Fedora Jam as it’s geared towards music production and so far so good.

I’ve got my Tascam US16x08 running using ALSA – which came with Fedora Jam and needed no configuration – and it all works with Mixbus32c. I have to say that, so far, Mixbus runs so goddamned smooth on Linux, which makes sense considering it’s based on Ardour.

My usual go-to and longtime favorite DAW is Reaper, and it turns out they have a Linux build.  I managed to get it installed and running but, at first, it would not pick up the Tascam. I kept at it over the past few days and now it seems to be running just fine – although under JACK rather than ALSA. I mean ¯\_(ツ)_/¯

Music aside, I’ve managed to set it up Fedora as a full-on desktop environment running KDE Plasma and with all my usual apps (Firefox, Spotify, FocusWriter) as well as a good number of Open Source alternatives. The most pleasing surprise is a video editor called Kdenlive. it’s go just the right amount of features that I used in DaVinci Resolve and Premier Pro to make it just right without excessive bloat.

I’m also loving how well a new release of Linux runs on six year old hardware. When I first brought the laptop home, and before I nuked the drive, I gave the Windows 10 install a spin and it was a little sluggish. Fedora, on the other hand, is running like a dream.

Linux has come a long, long way since I seriously tired it last. I know it will never overtake Windows or macOS – I mean, it’s been poised to take over for as long as I can remember – but wow, it’s so much better than I remember.

So far so good.

At the end of February, I posted about my beloved 11″ MacBook Air finally giving up the ghost.

This morning I was reading that the last of the 11″ MBA’s were being added to the obsolete list and I started thinking about the error icon I saw:

I looked it up. And found that it was most likely an issue with the SSD. For a goof, I pulled the laptop off the shelf, removed the back and and found …

There was no screw holding the M2 SSD in place. How in the … ?

My best guess is that when I took that machine apart a couple of years ago to  replace the battery, I forgot to put the screw that secures the M2 drive back in place. And in the time between then and now, the SSD managed to wiggled itself loose.

I have this tiny, external drive that holds a 128GB M2. I took it  apart and removed one of the screws holding the M2 in place. I then went to the Mac, re-seated the SSD, put in the screw, put the back cover on.  plugged it in, hit the power button and …

The Mac is humming away running a software update. Who knows how much longer it has, but I’ll take it.

This past week I went to turn it on. It gave me this:

So this was it. It didn’t go put with a whimper. It just decided to pack it in.

For ten and a half years, this little MacBook Air:

In all those years the MacBook didn’t have a single issue. I did replace the battery in 2019; it wasn’t dead, it just wasn’t holding a charge for any more than an hour and and that just comes with age and heavy useage.

RIP little MacBook. You more than earned it.