A few weeks ago I posted a small bit on Low End Tricks. One of those suggestions was to “Freeze/print tracks that are plugin heavy. In fact, freeze/print any track that has a set and forget plugin.”

This works fantastically. Here is a screenshot of the Reaper Performance Meter playing back 18 tracks and 2 groups/buses of a new tune I’m finishing up: 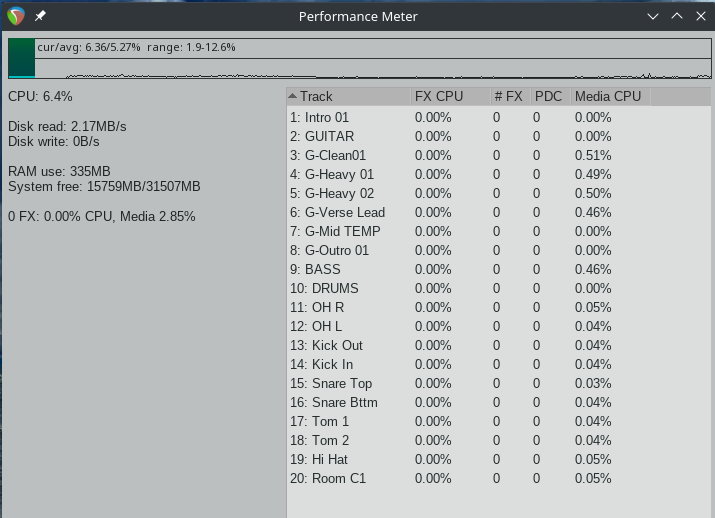 While there is not a ton of effects being used, each of those guitar tracks is being run through ToneLib GFX which I know from Mixbus can start using a good amount of CPU. So freezing (or printing or whatever you want to call it) helps out.

That being said, this can also come in handy for working around certain sticky situations.

While I love (love, love!!) ToneLib GFX, for some damn reason Reaper only seems to want to allow it on a single track. If I dare add GFX to a second track, Reaper crashes.  I’ve been trying to figure out what’s going on – the best I got was this long thread on the Reaper forums that didn’t amount to much, and that’s it (for now).

In the meantime I can use it on a single track without causing issues so I’ve been freezing tracks as a workaround. It’s not difficult and it doesn’t add any frustratingly unnecessary time to what I’m doing.

Here’s a look at some guitar tracks: 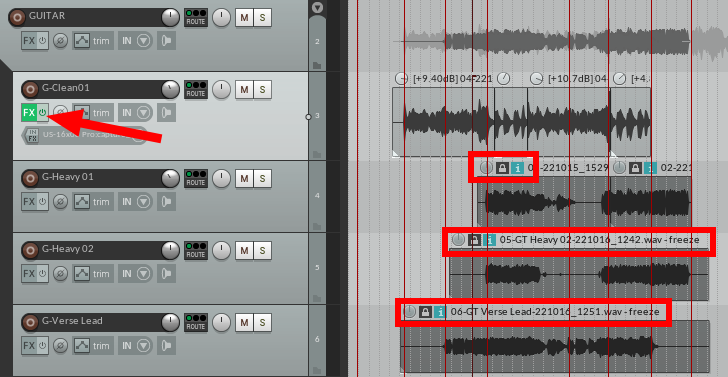 You can see that the FX toggle on the G-Clean01 track is enabled I have ToneLib loaded on that track and am actively working on the sound. The other tracks have greyed out media, lock icons, and say “freeze” on them. Those locked tracks are, for the most part, completed and I can’t do anything with them in this state past volume, pan, and playback unless I unfreeze them.

In its current state, if I unfreeze one of those tracks, it will bring back the ToneLib plugin and Reaper will crash. So if I do need to change something on, say, G-Heavy02 (tweak a sound, make a cut, etc), I have to freeze G-Clean01 and unfreeze G-Heavy 02. And so on and so forth.

Ideal? Not at all. This shit should just work. However nothing ever works 100% of the time, especially software. So instead of stamping my feet and whinging about it, I’ll just make do 1.

At some point a fix will appear. Or maybe not. Whichever happens, at least I can still work on my little projects relatively unhindered.

1: No, this is NOT because I’m using Linux. I’ve had just as much weird shit happen on Windows and Mac.