There has been some ballyhoo of late over the EU’s regulatory decision to force phone hardware companies to use strictly USB-C connectors for charging.

The quick and dirty is that the EU wants to force hardware manufacturers to make charging ports on all phones, tablets, cameras, headphones, portable speakers, and handheld video game consoles USB-C.

Uh-oh. Sounds like they’re trying to stamp out innovation, kill competition, and shut down Christmas all at the same time.

To me the EU’s decision to start forcing companies to adopt a single connector is a good start. While the port/cable situation is not as bad as it was fifteen plus years ago, it’s still pretty shoddy. And any company that is crying out and stamping their feet because this will “stifle innovation” or some such shit  (cough – Apple – cough), really needs to shut up and look at the bigger picture.

You may remember Firewire which was an Apple backed port that was much better than USB. If it was so great, where is it now? It’s dead. Why? Because USB got much better with 2.0 and no one had to pay Apple royalties to put USB ports on devices.

Now we have Thunderbolt, which is essentially the new Firewire. Granted it does outshine USB with more capabilities, but port design is shared with USB-C, which is a great idea but, why? Why do we have continue with two competing “standards” when we know one will win the day? I mean:

While I have little to no love for the entertainment industry, they’re really good at fighting over new formats and then shitcanning the loser.

Besides Firewire, USB took out a whole slew of connectors including parallel, serial, and PS/2. So why are we trying to come up with another connector rather than just make the existing one better?

At least now we have a single port shape that is popping up all over the place: phones, computers, speakers, headphones, etc. This is good. Yet we have two “standards” that use the same port but one does more than the other (and faster!).  This leads to the second problem: what does what?

Some USB-C cables charge. Some transfer data and charge. But which does which? Most of the time you don’t know until you buy a cable, bring it home and plug it in.  Other cables are Thunderbolt. Maybe you didn’t look at the box closely enough and you mistakenly bought a Thunderbolt cable.

This is where we were when Micro USB cables first came out. I mean, Micro USB is still a thing, especially with budget phones and super cheap electronic do-dads. You don’t need me to tell you that finding the right Micro USB cable when you want to copy some books over to your Kindle can cause fits. The micro end of these follow no rhyme or reason; they range from smallish to small to just plain odd.

Here is a small selection of Micro USB connectors I have lying around the house: 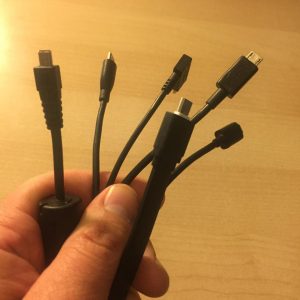 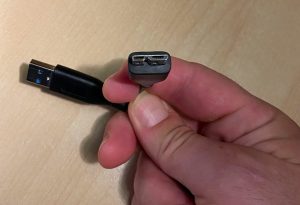 The device side ends on all of these are different. Why? I honestly can’t think of a good reason. Also, like current USB-C, some of these cables charge and others charge and move data. Which is which? You don’t know unless you plug the wrong one into your Kindle and find that you can’t move your new books over from your computer.

And then there is the Lightning connector. It’s Apple’s proprietary “we want to make the iPhone thinner but not wait a couple of years for USB-C to mature” connector. And what does Lightning have over USB-C? Nothing. It’s just iPhone and iPad only – but only the chaeapo iPad. All the new ones are USB-C.

THIS is why the EU wants to force everyone to USB-C.

For me, there is another reason we need to land somewhere and this one really gets to me every time I think about it.

The world spent the past fifteen years outfitting plugs everywhere with USB type A connectors. And I mean everywhere. Shopping malls. Houses. Cars. Cafes. Airports. Airplanes. You can buy electrical outlets for your home that have USB type A ports. There are extension cords that have USB type A ports included. You can buy lamps that have them.  There is literally nowhere you can’t plug in your shit. We no longer needed to look for a power outlet to plug a charging brick into because there are USB plugins everywhere.

Then along comes USB-C and now people with new phone can charge by … plugging their charging brick into a power outlet while we wait for the outlets in the coffee shops and the back of airplane seats to be replaced with USB-C.

Speaking of there are untold millions of charging bricks out there and the vast majority of them are USB type A. Then Apple was all “we’re not going to include charging bricks with our phones because: the environment!!!” and it felt pretty good to help the Earth until you bought a new iPhone and saw that the new cables are all Lightning to USB-C forcing you to go out and spend $40 on a new charging brick. The pile of USB type A bricks you have lying around your home? I dunno. Toss ’em out I guess?

All of this comes down to the fact people want clarity. They don’t want to adopt to one “standard” and then have another foisted on them a few years later in the name of innovation. People want to stop collecting cables, adapters, and third party peripherals. They want to pick up a cable, any cable, plug it in, and go. People don’t want to worry about whether a cable only charges or if it also moves data.

We really we need to settle on something and there is no time like the present. Unfortunately, it’s going to take governmental bodies to force it.  If we leave it to the tech companies (and the USB consortium), it’ll never get done. They’ll constantly update and change and “innovate” us into some new, better, faster, thinner something or other and we’ll be going through all of this again in another ten to fifteen years.

All of these tech companies need to stop competing over the stupid stuff. Compete on software, cameras, etc and stop the bullshit around ports.

Think of Nils Bohlin and the three point seat belt; it was patented but made free so any car manufacturer could use it. It wasn’t about making money. It was about making vehicles safer. I’m not suggesting that USB-C is life saving, it’s the spirit of it all.

Work to come up with a single port for a charging/data transfer/video and make all cables do all three things. Merge Thunderbolt into USB and be done with it.